Spotlight: Lucy (Daughters of the Sea #3)

Hey guys! Garrett and I have been at a loss for posts lately, but we finally have a small event we can write up....


The third book in Kathryn Lasky's Daughters of the Sea series is being published on March 1, and since that is coming up soon, I'd thought I'd do a little post on it, answer a few questions people have asked me about the series ect.
Here's the synopsis from Goodreads:


A choice between love and survival . . .Lucy's family is excited to spend the summer in Bar Harbor, Maine. Her minister father is pleased to preside over such a prestigious congregation, and his social-climbing wife is ecstatic at the chance to find a rich husband for her daughter.Yet Lucy wants nothing to do with the Bar Harbor social scene; she's simply excited to spend the summer by the sea, watching the waves from her favorite spot on the cliff. Despite having never gone swimming, Lucy feels an intense connection to the ocean, and meets a handsome ship-builder who shows Lucy a world she's never known, yet somehow always longed for.However, her mother will stop at nothing to keep Lucy and the ship builder apart, even if it means throwing Lucy into the arms of a wealthy man with a dangerous secret. Can Lucy break free and embrace her destiny as a daughter of the sea? Or is she doomed to waste away in a gilded cage, slowly dying of a broken heart?


Alright, sounds pretty cool right? I've actually had more than a few people inbox me on Goodreads and ask some things about this particular series, so here are some things you should know before starting the book:


1. You should read the the books before it (Hannah and May respectively). May didn't particularly depend upon Hannah as far as plot details and such, but it was good to read them together.


2. This series is decidedly more middle grade than Young Adult, which is not a bad thing. I still liked them, but the writing is descriptive yet simple and there isn't a whole lot of complexity, but they are interesting. That might change with this installment however. May leaned more towards Young Adult than Hannah (there was a love interest, some family drama, whereas Hannah was firmly set in the middle grade).


3. It''s turn of the century historical fiction, which I personally loved. Mermaid books are either urban fantasy or set back in the ancient days of the Greeks, so this is a really fresh perspective on the legends and lore. Lasky is well researched in the era, and presents it very well for young and old readers.


4. This book is the set-up for the finale' due in the fourth book. While there haven't been a lot of details released about the last DOTS book (Ha! DOTS! That's cute!) we do know that it ultimately involves the sister's going home to the sea. I'm hoping to see more of that in this book.


What are y'all's thoughts? Looking forward to it? Happy reading :)

Posted by Randi Redvines at 9:57 AM 6 comments: 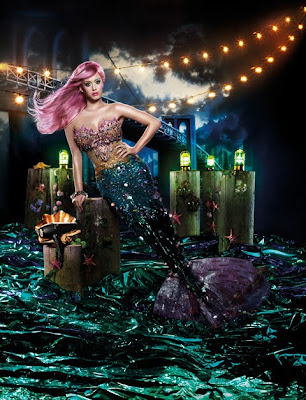 So, we've mentioned on the MerBlog before how Katy Perry and Lady Gaga were both donning mermaid outfits, and except for a few Twitter pics, we haven't really seen Katy Perry in all her finned glory. Now, as you can see from the picture to the right, Katy Perry's mermaid photo has finally been released into the world!
This was part of a photo shoot, not a music video as I originally thought. I really love the mixture in this picture: we have the overall pop-star diva look, mixed with the more cotton-candy aspects of mermaid lore. Love the pink hair, too!
Katy Perry makes a really awesome mermaid, I have to say. So, between Lady Gaga's Yuyi and Katy Perry's unnamed mermaid, who do you think made a better sultry sea vixen?
Posted by Garrett at 5:14 PM 3 comments: