We're Here For You

I was looking back through the topics in the merbooks forum on goodreads, and found a rather old conversation about how some of the members had been bullied or looked down upon for loving mermaids.

I've heard similar stories throughout the year I've been involved in the mermaid community. And while mermaids are making a comeback in culture as of late, a lot of people still think that we're hanging on to the idea of Ariel longer than we should.

So if anyone who reads this blog feels alone, please know that we are always here for you. Just leave a comment on  post or e-mail me, or I'm sure Garrett would  be willing to talk as well. I think it's ridiculous the amount of incredulous stares and snippy comments I get about helping out with this blog, and nobody should ever feel alone or alienated by something they love.

You're always welcome to leave an e-mail address for us or join the group over on Goodreads so as to chat with us!

Seriously, we love you guys.

Lies Beneath is an fascinating look into the mermaid genre, something that is growing larger and larger as the year rolls on.

This one offers a respite from some of the more fluffier additions. It leans more towards Lost Voices, another excellent mer-novel.


One of the cool things about Lies Beneath is that it is one of the few mer-books to be narrated by a guy. It really works for the story. If it had been narrated by the main female protaganist, Lily, LB could have easily fallen into Twilight territory. Nice move, Ms. Brown.

I also enjoyed Calder's character development. I also enjoyed that even though the book is short, I personally still felt like there was enough time for his relationship with Lily to mature and his feelings and loyalties to change.

The middle passages of the book get a little tedious, but it's over pretty quick. I also would've liked a little more development to Calder's sisters and maybe even a little more on Lily. These are the only parts of the book that I felt were a little rushed.

I also enjoyed how the mer-side and human sides are dealt. For example, in some mer-books, transformation from human to sea creature is often painless. In Lies Beneath, it describes transformation as extremely physical and painful without being incredibly graphic or gory. I also thought the motives for murder and migration patterns were nice touch. Calder often faces the struggle of where the human side of him begins and ends, and the mythology of the mer-people in this book really aids that struggle to a fascinating conflict.

Perhaps the greatest feat of Lies Beneath is how some of the more disturbing content is handled so tastefully that you're able to stomach it. For example (And this is a spoiler so skip ahead to the next paragraph if you don't want to be spoiled), it's revealed later on in the book that one of Calder's adopted mermaid sisters is secretly in love with him. Calder handles it with class. Also, the sirens are all a little crazy anyway, so it softens the blow. And as I mentioned before, Calder is a serial killer, basically. And although he learns to let go of that part of him as the story draws to a close, he spends most of the book in that mindset.

If you like the darker side of mermaids, this one is definitely for you. I might even recommend it to those who are looking for an introduction to darker mermaids. Don't miss this one.

-Randi
Posted by Randi Redvines at 10:10 PM No comments:

We reported earlier this year that a spin-off from the popular Australian mermaid show H20: Just Add Water, was going into production. Originally titled Mako: Island of Secrets, it's now been changed to Mako Mermaids.

Production started in early May, according to an Australian film site. However, a detail I didn't catch was that the show is mainly going to center around a trio of mermaids, Sirena, Nixie, and Lyla, while Zac, previously thought to be the male protagonist, looks to be taking more of a supporting role, but still crucial to the plot.


Actresses Lucy Fry, Ivy Latimer, and Amy Ruffle will be taking up the roles of Lyla, Nixie, and Sirena respectively with Chai Romruen playing Zac.

It's on contract for 22 episodes about 20 minutes each.

Here are pictures of Lyla, Nixie, Sirena, respectively (note that these aren't shots from the set, they're whatever picture I could find of the actor, so you'll at least know what you're in for). Believe it or not, I couldn't find any legit picture of Chai floating around Google, but if anyone has any good souces, let me know and I'll edit the article to include them.
EDIT:
THIS JUST IN: Here is a shot from the set. No mermaid shots yet, but here you go: 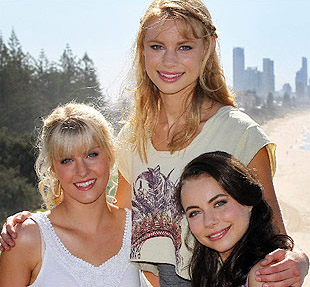 What do you all think? I know there are massive amounts of H20 fans across the world, so this news is incredibly exciting. Comments are welcome!

Is Ariel Out of Once Upon A Time?

Earlier this year we reported that the hit TV series, Once Upon A Time, was possibly working on a Little Mermaid reworking for the show. While the first season of the show has come and gone, the next season has just announced two other characters slated to air on the show.

The two characters announced, one Princess Anastasia and an original character named Magnolia, seem to have nothing to do with the Little Mermaid storyline we thought might happen. We literally only know the names of the characters, so we can't be sure. However, I personally am not holding my breath for an Ariel story-line.

Are you disappointed that the show isn't using the story? Thoughts are welcome in the comments.