I admittedly didn't think Garrett and I's Vicious Deep reviews would be so close together, but I actually got around to reading the book faster than I thought, so I hope you all don't mind!


It's been about a year since I found out about the Vicious Deep and it's finally here! I loved this book so much and really loved the unique take on the mermaid mythology and the cool location on land. Also, it's completely hilarious. I don't remember the last time I laughed so hard reading a book.

Tristian reminds me a lot of Tony Stark, all that wit and erm, good looks if you will. It may just be because the Avengers opened the weekend I read this and it was totally awesome but they struck me as similar characters.

The secondary characters are also funny, real, and have their own quirks. The only one I thought was a little lacking was Layla, but there was nothing too bad going on there.

The setting on Coney Island is really vivid and becomes a character itself in the story. You can really visualize it as you read. It fits the themes and really adds a lot to the story. It's been a while since I read a book where the location was so central to the story.

The mer mythology is unique, as is the narrator. I've never read a mer-book with a male narrator, and it's a nice change of pace. The mer-world is fascinating, borrowing equally from Greek mythology and of course The Little Mermaid.

I got a bit bored with all of the stuff on land, but the boredom never lasted very long. There's always something new coming in the Vicious Deep, and I think it will be even more fun to re-read later.

Altogether, four and a half stars and a looooooooooong wait until the sequel. Two thumbs up Zoraida! 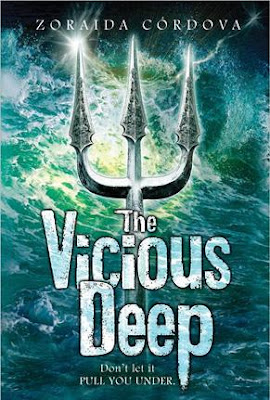 The cover of The Vicious Deep tells you not to let it pull you under. Well, you'll want to do the opposite. Because I'm warning you: this book's just like the whirlpool Tristan encounters in the beginning; it sucks you right in and refuses to let go. The Vicious Deep is something I never expected to find: a guys' mermaid book. Well, maybe not exactly, more unisex, if anything. There's plenty of kisses and romance for the ladies, but there's also plenty of thrills, action, and fighting for the guys. TVD can be summed up in one word: FUN. From beginning to end, I laughed and gasped and kept flipping pages. Zoraida's writing style is quick and to-the-point, but also witty and hilarious. There were also many in-jokes that every Little Mermaid fan should pick up on. And if all that hasn't peaked your interest, pick up the book. There are several memorable scenes in the novel that will make you laugh, cry, and sit on the edge of your seat. One of my all-time favorite scenes that had me grinning from ear to ear was the bubble-gum scene. You'll understand. The world of TVD was fully developed too. We not only have traditional mermaids, but all kinds of paranormal creatures, from vampires to werewolves, to fey and shifters. There's a little something from everyone in the book. Probably my favorite thing of the novel was the voice: Tristan. Most mermaid books are from a female perspective, but getting the point of view of a teenage boy as he undergoes his transformation into a merman was funny as it was highly readable. The bathtub scene of Tristan's first transformation was incredibly hilarious. And the other characters! There are so many of them, and each of them so diverse that you won't want to leave their world. From Layla to Gwen, Thalia and Marty, each character felt so real and I didn't want to say goodbye. So if you want good ol' sea monster action, a classic summer love story, a magical trip under the sea, or a seriously creepy villain, dive into The Vicious Deep!
Posted by Garrett at 5:56 PM 1 comment:

WARNING: Mild spoilers for the first and second books in this series are in the plot description for this third installment in the Fins series. Proceed with caution if you haven't read the second book.

The Fins series is the Princess Diaries of the mermaid world. Very fluffy and girly, but there is also a lot of heart and some depth to the stories. Lily and Quinn are adorable and I personally was giggling every other page. It's just a really cute series.

I myself have not finished the second book in the series yet, but this third one looks to be pretty darn interesting if I do say so myself!


Are you guys excited?