The Fred the Mermaid Trilogy by MaryJanice Davidson

MaryJanice Davidson is well-known for her Vampire Queen Betsy paranormal-romance series. But she's also written about mermaids, with the Fred the Mermaid Trilogy, consisting of three books entitled Sleeping With the Fishes, Swimming Without a Net, and Fish Out of Water, released in 2006, 2007, and 2008 respectively.
Fred is the anti-Ariel; she's cranky, ill-tempered, and she's pretty much as un-mermaidlike as you can get. Check out my reviews of all three of the books below: 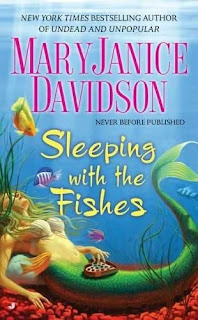 Book 1: Sleeping With the Fishes
Sleeping With the Fishes is a laugh-out-loud book that turns the mermaid genre upside down. The book is filled with snide remarks toward the well-known 'Little Mermaid' and 'Splash' movies, mainly as a way to show how un-mermaidlike Fred really is. I loved all the characters in this book, and the way they interacted with each other. MaryJanice Davidson is great at coming up with snarky dialogue and one-liners that make me laugh at loud and look like a freak to anyone in the vicinity of me while I'm reading. It's a quick read, and you could probably breeze through it in a day or two. It's mostly fluff and comedic fodder, a good escapism when you're looking for something light that you don't have to analyze. Plus, if you love mermaids and want to see a different side to the mermaid myth, you'll love this book! 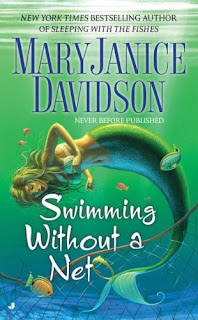 Book 2: Swimming Without a Net
The cover of this book caught my eye from its place on the shelf, and after weeks of contemplating, I decided to pick it up and read it. I'd heard of the first book in the Fred the Mermaid Trilogy, Sleeping With The Fishes, but I had never gotten around to reading it. I probably won't read it, even though this book was...well, tolerable. Okay, if this book hadn't been about a mermaid, I don't think I would have ever picked it up. It was okay, but it could have been waaay better. The novel was 304 pages, and most of that was made up because of the large font size, with few lines on each page, and almost twent-five pages of quotes, acknowlegments, title pages, and author notes. Basically, Swimming Without a Net is all fluff, no story. With only a few good descriptions of the mermaids, barely any action, and Fred's usual grumpiness running abundantly throughout, this book has its random charming moments, several attempts at humor, and one very brief sex scene.
My advice: read at your own risk. I only read it because it was about a mermaid. 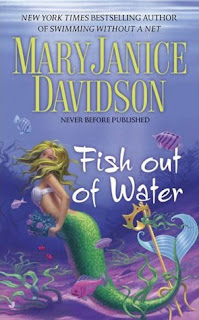 Book 3: Fish Out of Water
Fish Out Of Water was A LOT better than the previous book, Swimming Without A Net. In this one, the mystery of Fred's biological father is finally solved, but he might not be as warm and caring about Fred as he first appears...
I read this novel in about a day, because it's very short, and the font size and word count for each page is very minimal. Like the second book, there was almost thirty pages of quotes, acknowledgments, author notes, a 3-sentence long prologue, and title pages galore!
Personally, I don't think it would be too hard to come up with ideas for a mermaid book. Since there's hardly any out there, you can practically write whatever you want! (I have written a few myself, a time or two.) Why the Fred the Mermaid series is lacking in plot is a mystery to me. That being said, I wish this wasn't the last book, because the series could have eventually started to get better. The reason I liked this book better was that Swimming Without A Net didn't get was because of the climax of this book. There was actually some intense action going on there! Plus, the book has to be given props for such a beautiful cover!
So, there's my review for the third and final book of the Fred the Mermaid Trilogy. Fish Out Of Water may be better than the previous novel, but it still has its own problems.

If you think the Fred the Mermaid books might be for you, definitely check them out! A warning, though, that these books are adult and do have adult content. So if you're okay with that, you die-hard mermaid fans don't want to miss these!
Posted by Garrett at 12:59 PM