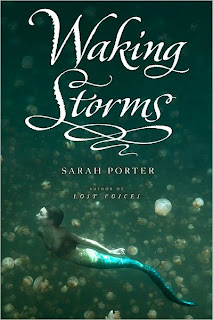 Lost Voices by Sarah Porter is a mermaid book filled with darkness, pain, and mesmerizing beauty. It's also the first in a trilogy. I've reviewed the book - and even interviewed it's amazingly talented author, Sarah Porter - on the MerBlog before. Waking Storms is the second book in the trilogy, set for a tentative release date of July 2012. For those unaware of what the book's about, here's the summary courtesy of Goodreads:
After parting ways with her troubled mermaid tribe, Luce just wants to live peacefully on her own. But her tranquility doesn't last long: she receives news that the tribe is on the verge of collapse and desperately needs her leadership. Anais, their cruel queen, wants Luce dead. Dorian, the boy Luce broke mermaid law to save, is determined to make her pay for her part in the murder of his family. And while the mermaids cling to the idea that humans never suspect their existence, there are suddenly ominous signs to the contrary.

But when Luce and Dorian meet, they start to wonder if love can overpower the hatred they know they should feel for each other. Luce's new friendship with an ancient renegade mermaid gives her hope that her kind might someday change their murderous ways. But how can Luce fulfill her rightful role as queen of the mermaids without sacrificing her forbidden romance with Dorian?

Sounds good, huh? I'll definitely be checking this one out. Hopefully, Netgalley will have it, being that's how I read the first.
Posted by Garrett at 10:45 AM