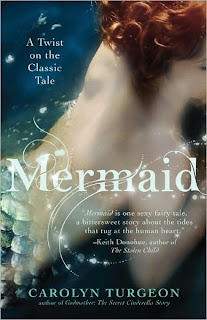 If you've ever read the original story of The Little Mermaid by Hans Christian Andersen, you might remember the human princess that stole the human prince's heart, as well as stole him from the little mermaid. It's a unique twist to be able to get inside her head for once and see the story from her eyes, in addition to the little mermaid's. The mermaid in this story, named Lenia, lives in a beautiful underwater kingdom ruled by her mother, the sea queen, and though contact with the human world is forbidden, Lenia dreams to explore this world and gain an immortal soul.
If you're familiar with the original story, this novel follows it fairly closely. However, this is not a children's book at all, and it does contain some adult content, especially concerning the little mermaid adapting to the differences between a human body and her mermaid body. It gets very detailed, but then again, it puts you in the fins shoes of a mermaid who is trying to get used to her new form.
There were also quite a few big changes to the story that were of the author's own imagination. For example, everyone gets a happy ending in this story, in their own way, a deviation from the original fairytale, which is darker and more heartbreaking. However, Carolyn Turgeon manages to capture the darkly beautiful essence of the original story while managing to spin her own version of the tale at the same time. Fans of the original The Little Mermaid looking for a more adult version of the tale will delight in Mermaid: A Twist on the Classic Tale.
Posted by Garrett at 7:05 AM