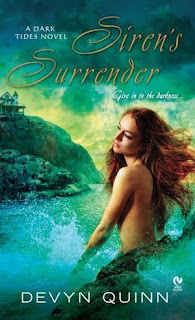 Siren's Surrender is the second installment of the Dark Tides mermaid trilogy by Devyn Quinn. This one is quite different from the first novel, due to the fact that humans discover the existence of the Mer, and the mermaid sisters must deal with the realization that their lives may not belong to them anymore.
Unlike the first book, this one did not have as much mermaid action as the first. There were only two scenes, both brief, of the girls in their mer forms. This book focused more on the discovery of the Mer, and how they dealed with the G-men who had them quarantined. Basically, it reminded me of the last half of Splash, in which Madison the mermaid is caught by scientists, and then it's a race against the clock to save her. That's kind of like what happened here.
I do have to admit that I love the villain in this series. Queen Magaera is one evil mer queen, and she doesn't care who gets hurt along the way: she wants power, and lots of it. The actions she commits at the very end make me feel like the Lonike sisters are going to brace for an epic battle in the next book. I can't wait to see how the sisters deal with the Queen for good in the final novel.
All in all, it was another great addition to the Dark Tides trilogy, and I certainly can't wait to see how everything ends with the next book, Siren's Desire, which is Addison's story, and will be released next February.
Posted by Garrett at 9:29 PM